My name is Pieter Pauwels, I’m a 20 year old student living in Belgium.

I mainly speak Dutch, but I’ve started learning English at a very young age over the internet and have since become fluent. 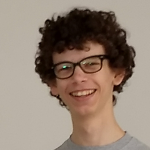 So far, I’ve studied 2 years of Game Graphics Production at my School. Although I may not have any experience working in a business yet, one of the things I have worked on is a group project in collaboration with other students to make a game, so I know what goes into the creation process and know how to work together with not only other artists, but also programmers. (read more about this project here)

If everything goes according to plan, I should be doing an internship at a video game development company next year, and I look forward to more opportunities to learn and keep improving.

I’ve always had a passion for video games and art so when I first heard about DAE I was obviously interested.
Being creative has always something that’s in my personality, even when I was a young child I went to art class on top of going to regular school. Some Photoshop lessons were also given, and those were always my favorite. Sadly after a couple years the public transportation changed and I was unable to continue going there, however that did not stop me and later I chose to study art at VTI Kortrijk. There I was able to take art more serious and not just as a hobby. There were again classes given on making digital art, and again those were the classes I excelled at, especially since I already knew the software from the art academy and experimenting by my own.

When I heard about digital arts and entertainment, I started trying out blender, and even though I didn’t get very far with it, that didn’t stop me from going to DAE. At first I was not sure if I made the right decision, but that feeling faded after about a week. The first year of DAE went very fast, and even though it was hard to keep up at times, I managed to get through without having to retake a single class.

Around easter of 2017 I participated in the 38th ludum dare gamejam with four friends. and even though our game didn’t look like much, I had a lot of fun and learned a lot of new things, such as how to work with unity, github, and work together in a team.

The summer holiday after that, I was watching a livestream of a small American charity I was watching when the idea came up to make a video game to raise money for the charity. The project was called ‘Dillontron’, about a robot named after the charity’s CEO and main twitch streamer. the idea stuck around and even though as of now not much progress has been made, it is still a project I hope to finish one day.